Esther and Accepting the Call to Leadership

Happy is in fact the operative word here. The Talmud tells us that when the month of Adar begins, we increase our joy (Talmud Bavli, Ta’anit 29a). This is of course because Adar is the month during which the festival of Purim occurs, when we celebrate and remember when the Jews were miraculously saved from annihilation at the hands of Haman. Clearly, there is much to celebrate, and while there must have been much angst and trauma from the experience of uncertainty and fear for those living through the story as events unfolded, there was ultimately a happy ending that we celebrate each year.

Esther told Hathach to take back to Mordecai the following reply: “All the king’s courtiers and the people of the king’s provinces know that if any person, man or woman, enters the king’s presence in the inner court without having been summoned, there is but one law for him—that he be put to death. Only if the king extends the golden scepter to him may he live. Now I have not been summoned to visit the king for the last thirty days.” When Mordecai was told what Esther had said, Mordecai had this message delivered to Esther: “Do not imagine that you, of all the Jews, will escape with your life by being in the king’s palace. On the contrary, if you keep silent in this crisis, relief and deliverance will come to the Jews from another quarter, while you and your father’s house will perish. And who knows, perhaps you have attained to royal position for just such a crisis.” (Esther, 4:10-14)

Understandably, Esther feared for her life, and was hesitant to commit to Mordechai’s plan, that she should intercede with the king on behalf of her people. In response, Mordechai at first challenges her false sense of safety from Haman’s plan as a member of the royal household. But then he changes tack and calls to her sense of calling: your whole life has led to this moment. This is what you were born to do. This is God’s plan for you. Embrace your destiny, step forward, and take the mantel of leadership of your people. This second approach is what makes the difference, and Esther’s immediate response is one of action and strategy. 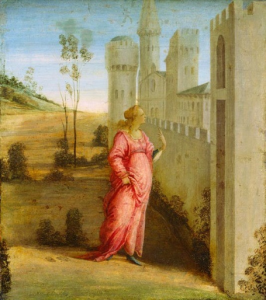 Dr. Erica Brown, in a blog for the Wexner Foundation, shares her thoughts on one of Boticelli’s six paintings of Esther. The painting has her standing alone, just outside of the walls of Ahasuerus’ palace. Dr. Brown contrasts this scene with paintings of her by other artists, which almost always have her surrounded with an entourage of maidens or courtiers, or has her facing the king or her nemesis Haman. She suggests, “Botticelli, with his innovative composition, helps us imagine Esther’s inner life just before everything changes for her. It’s a moment not even the Book of Esther offers us.”

While Dr Brown imagines Esther reflecting on who she is before she is forced to reinvent herself in a new leadership role, it is not hard to imagine Esther at this moment also reflecting on her calling and destiny as a leader, and the weight of responsibility that will change her world, and the Jewish world, forever. It is our challenge to do the same in our own lives. To hear the call, and feel the weight of responsibility, as Jewish leaders in our communities.
[Photo Credit:
https://en.wikipedia.org/wiki/Life_of_Esther#/media/File:Botticelli_-_Esther_at_the_Palace_Gate.jpeg]

Check out these great Purim resources:

Dr. Erica Brown will be delivering a three-part webinar series on Esther in Art and Text for https://www.929.org.il/. To sign up for the webinar please click here.