What exactly is “Base Berlin” a “pop-up” project that Rebecca Blady and her husband Jeremy Borovitz started in 2016 in Berlin, Germany? A community meeting space? An educational hub? A model Jewish home? A pedagogical model? It’s all of these, and may also be the future of Jewish community building for the 21st Century. 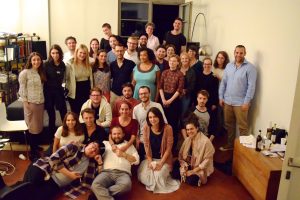 Rebecca and Jeremy are American Jews who grew up in the New York area. They met a few years ago when they were working as JDC Entwine Global Jewish Service Corps Fellows. The two had family roots in Central and Eastern Europe and had spent some time in Poland and Ukraine. When they started their rabbinical studies in New York they also developed the idea to do something meaningful in Europe, to strengthen the Jewish community there. They decided to go to Berlin for the summer and create a “pop-up” informal, welcoming, cross-denominational, open space which would be open to everyone. Why Berlin? Rebecca answers, “It has a lot of Jewish infrastructure already and it has a lot of Jewish people. In terms of language, Jeremy speaks Russian, I speak Hebrew and we both speak English. So, we knew three out of four, the fourth being German, languages that are spoken among the Berlin Jewish Community”.

With the help of the Hillel International’s Office of Innovation and private donors they came in 2016, partnered with the Fraenkelufer Synagogue, rented a flat in the hip Kreuzberg neighbourhood and started to run all of their programs and classes from their apartment. For the next two years during the summer, their house became one of the centres of Berlin Jewish life.  –“We were the kind of a space that is between Chabad and the Moishe House.” – says Rebecca. The space she was referring to was a loft apartment with a huge room that could accommodate forty to fifty people.

What kind of programs did Rebecca and Jeremy organise in their home? Their approach was flexible. –“At the very beginning, we actually hosted Friday night services and dinners. Then we realised that we should not be holding services. There are many synagogues in Berlin. So, why should we host services and become a whole different community if there are all these synagogues, that would love to be filled with people going to them? We decided it was better for us to work with the synagogues and support them by encouraging people to go to their services and to come to us for the program afterwards.” – Rebecca recalled. On average thirty people would come to participate in their Shabbat program. As a result, almost 400 people attended just this one program in the summer of 2017.

Apart from this, Rebecca and Jeremy offered a Torah study program and Yoga classes. They also taught people how to give a shiur, helped eight members of the Fraenkelufer Synagogue to develop women’s empowerment initiatives and collaborated with the Jewish Activism Summer School in Berlin. But the two flagship programs at Base Berlin turned out to be “How to Jew” and “Berlin Tish”.

“How to Jew” was a five-part course of basic Jewish literacy. Visitors and guests at Base Berlin were a mix of different people such as people who grew up and didn’t know that they were Jewish, people who had converted to Judaism, people who were interested in converting to Judaism, people who needed to refresh their knowledge, who had practised Judaism in the past but stopped and now wanted to start again and people who have had non-Jewish partners or friends who they wanted to bring to classes. All of them could benefit from the class on the basics of Judaism, if it was to just to learn it for the first time, or to relearn it again formally. 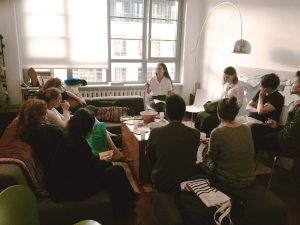 “Berlin Tisch” is a program that developed in Base Berlin and now runs separately. It was created with the JDC grant to help fund Shabbat and holiday meals in other people’s homes. Anyone can now organise a Shabbat meal with the small subsidy and get the support and consultation on kashrut and rituals from the local, hired on-the-ground coordinator. Eighteen people hosted the meals in their homes through Berlin Tish in 2017. This year the goal is to have more than twenty.

After two years of developing Base Berlin, Rebecca and Jeremy realised that the project is a pedagogical model by itself. –“We saw a need for actually strengthening the Jewish community in such a way that  felt personal to people. So, we thought, ok let’s start with the home. We started the whole model through Base Berlin and we realised that Base Berlin had been a curriculum the whole time” – Rebecca reflected on. By running Base Berlin, she and her husband were modelling the Jewish life for other people. People who were coming to their home and classes were not only coming for fun. They were also coming to see a kind of a home that they would want to create for themselves.

In April 2019, Rebecca and Jeremy are coming back to Berlin for the third time. This time for longer. They plan to stay for fifteen months and continue to work on building the community, empowering the local lay-leaders and still promote Judaism through the model of their own home. – “Our dream is that Base Berlin in the future will be taken over by a Rabbi trained in Germany. This is what we are looking for. To replace ourselves by somebody local who can take the ideas of Jewish people here in Berlin and put them into action for their community.”

For more information about Base Berlin and Berlin Tisch, see: