Starting a new community is not easy, but it is something that Nachshon Rodrigues Pereira has learnt a lot about, and he has a successful model for how to do it. Nachshon is 32 years old, lives in Amsterdam and three and a half years ago founded a new synagogue called Bendigamos, which is the youngest and fastest-growing Jewish community in the Netherlands. Based in Amsterdam and with deep roots in the Spanish-Portugese tradition, Nachshon and a small group of friends decided to reach out to those who had left the traditional synagogues, but were looking for connection and community. Today, Bendigamos offers bi-weekly Shabbat services with Kiddush afterwards, monthly children’s services and education for all ages, including Bar/Bat Mitzvah classes, cultural activities, parties and various events. All people involved with running the synagogue are volunteers. As Nachshon says, “Bendigamos is not my job. It is my passion, something I do on the weekends. I didn’t do all this because I think I am a good synagogue leader. I didn’t start a shul because I really wanted to have my own shul. I started it because I want to have a community in ten or twenty years.” 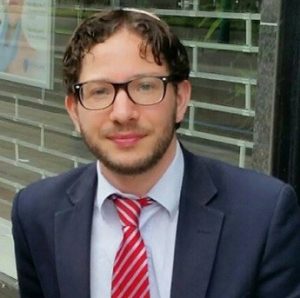 “I would never forgive myself if I just had a successful career, but there would be no Jewish community for my children and grandchildren to go to, and my own ancestry of 400 years of Spanish-Portuguese culture would just go down in the drain. I would not be fulfilled.” This is what Nachshon Rodrigues Pereira shared with me, when we met at the Limmud Festival in the UK, last December.

Nachshon was born in Hage, Germany into an Orthodox, Portuguese family with genealogy reaching back to the Spanish-Portuguese inquisition. He studied Political Science and has a Bachelor and Masters in European Politics. Nachshon’s family moved to Amsterdam when he was still a child and he was always involved with the Jewish community in the Netherlands. He started in the youth movement, later he began to teach classes and eventually became a Hazzan and the educational coordinator at the Portuguese Synagogue in Amsterdam. But it wasn’t enough. “I wanted to activate and reach the younger generation. People who would come to the Synagogue were mostly over 60 years old. I wanted to create the environment, where the young could explore their Judaism with no judgement and in the welcoming atmosphere. I saw people leaving the community; it was dying out. I wanted to change that.”.

Together with seven other people, Nachshon decided to start the new synagogue. “We didn’t want to steal people from the old community. We were focusing on the people who had already left, and new people.” he said. Today, Bendigamos offers bi-weekly Shabbat services, with a Kiddush afterwards, a monthly children’s service and education for all ages, including Bar/Bat Mitzvah classes, cultural activities, parties and various events. All people involved with running the synagogue are volunteers. 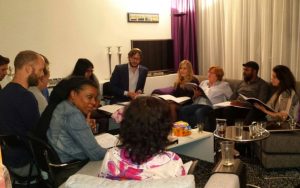 I asked Nachshon, how do you build a community? How does one start? He started with a core group of seven people and an idea, without knowing if there would be lots of people interested. – “I knew people from the youth movements who were not coming to a shul and I thought that if I make a new synagogue, then these people would definitely show up. So, I just started. I invited all my friends. We rented a space. I posted about it on Facebook. Within the first six months, I had about 35 people attending the service. We always tried to connect the service with a special event that would attract people, like a birthday, engagement or birth. We wanted to become more accessible and make all the Jews who come feel at home. Quickly people realised that our community is a nice place to be.”

He also emphasised the importance of good marketing and planning. “The message you create, the sort of language you use is very important. People come to the events when they feel that they might meet friends and peers. So, if you want students to come and you create a flyer where you don’t mention the students at all, and it looks boring and just synagogue stuff, then you won’t attract the students. You can have three different posters made for one event, with three different messages and you will have three completely different groups of people coming. Also, you need to follow-up on your events. The worst thing to do is to put a lot of energy into organising an event and then after it happens to not follow-up. If someone comes to your event you need to have a list ready of all of the events that you plan to organise in the future”.

The Shabbat services at Bendigamos are orthodox and according to the traditional Amsterdam-Portuguese rite, but the members of the community are mixed. That was a big surprise to Nachshon. He estimates that twenty percent who come are Portuguese, thirty percent are Sephardi Jews and the rest are Ashkenazi Jews and Israelis. The goal is to make the services accessible and pleasant for all the new people to follow. There are explanations give  and there is also a phonetic text of Hebrew provided. The Chabad Rabbi comes to give a shiur (short class) at the beginning but the services are led by everyone from the community. 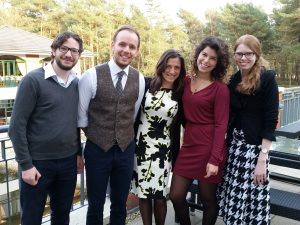 Around 600 people come to Bendigamos services and events during a year with around 200 people closely affiliated with the Synagogue. “We created something called “Amigos” (“Friends”). We ask you what kind of events you might be interested in and what kind of  volunteer work you can offer. Then we ask for a monthly contribution of two euros at least. If you are a student you may pay two euros and become an Amigo, and we will give you discount for some of our events. People also give us ten euros, 15 euros and we have a person who gives us 200 euros each month”, Nachshon explains.

“Bendigamos is not my job. I do not get paid to do it. It is my passion, something I do on the weekends. I didn’t do all this because I think I am a good synagogue leader. I didn’t start a shul because I really wanted to have my own shul. I started it because I want to have a community in ten or 20 years. Last year we had a bat mitzvah for a girl who had the first bat mitzvah in her family for three generations. Her grandmother was a member of the Amsterdam Jewish community during World War II. After the war, she didn’t want to have anything to do with the Jewish community anymore. Her daughter was not allowed to do anything Jewish until she passed away. Now her grand-daughter had a bat mitzvah, the other grand-daughter will have one soon, and their mother will have her bat mitzvah next year.”

To find out more about the Bendigamos visit: