(Natalia is a Kaplan Fellows @Yesod Cohort I)

“The heart, the success and growth of Jewish culture has often involved critical thinking. Critical thinking is traditionally a core element of training in the orthodox world, where two people in a Yeshiva would study together and critique the Torah. Through that process, they learn and become wiser.” This is the tradition that Michael Rubenfeld drew from when he established FestivALT, an arts collective that produces an annual program of radical Jewish art initiatives in Kraków, Poland. FestivALT is an alternative Jewish festival that combines theatre, visual art, activist intervention, site-specific performance, and community conversation. It happens at the same time as the popular Jewish Culture Festival and over the past two years has attracted 1,200 participants. 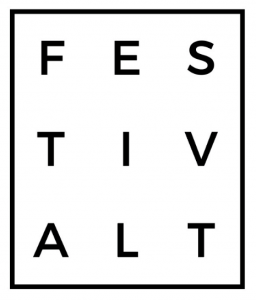 Michael uses arts and culture to attract diverse voices to discuss Jewish identity and history in public spaces. He and his team of friends and volunteers have built an active festival that questions and debates core issues that are not discussed in other parts of the Polish Jewish community.

The city of Krakow is regarded today as one the most vibrant and well-known examples of Polish-Jewish revival in contemporary Poland. It is home to several Jewish communities and active cultural Jewish institutions, and attracts Jews from all over the world as well as non-Jews drawn to learn about Judaism, Jewish culture and history, and hosts an enormous Jewish culture festival run by non-Jewish Poles every summer. Yet, when Michael Rubenfeld started coming to Poland regularly, he found that something was missing. Michael is a Canadian cultural producer and theatre maker. He came to Poland for the first time a few years ago with his mother and that journey prompted him to write a play called “We Keep Coming Back”. In it Michael and his mother are trying to understand modern Poland, its painful history and at the same time their emotional and complicated connection with the country of their ancestors.

When Michael got to know Krakow better he realized that, for him and many other people in the city, there was a lack of a Jewish space that embraced critical thinking; a space where the complexities of Polish-Jewish landscape were being investigated. He looked for a way for people to negotiate their emotional, psychological response to the fact that they are both Polish and Jewish, and for the Jews who were coming to Poland for the first time and were confused by what they were feeling.

“I wasn’t the first person to have this idea of doing an alternative festival,” Michael told me. “A lot of people were talking about that and wishing that there would be something. I just knew how to make it happen, because I have been producing festivals for a living.” Together with his wife Magda and their two friends Jason Francisco and Maia Ipp they founded FestivALT in 2016. Since then there have been two yearly festivals, with the third one coming in June 2019. Each one lasts 7 days and it is packed with programing that tackles the questions of identity and memory using a cultural case study of Krakow and Poland. 1,200 people participated in the first two festivals, with Jewish artists from all over the world and Poland joining. Thirty events and projects were introduced, of which half were created just for the FestivALT. Two of these include  , “Lucky Jews” and “Medical Plants of Plaszow”. 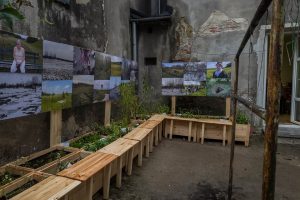 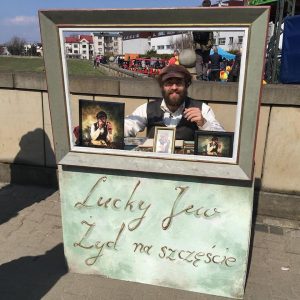 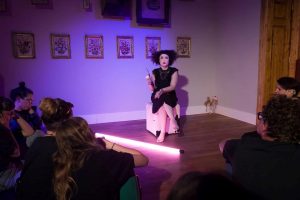 “Lucky Jews” is a performance that grew from the Polish folk culture. In Poland, you can buy paintings and the figurines of Jews with the golden coin as a lucky charm. For Poles, it is a reminder of the Poland’s pre-war Jewish communities. For many it is read as an example of anti-Semitic caricatures. During FestivAlt, a living Lucky Jew would sell images of himself in public spaces, in the theatrical mode, creating a lot of buzz, controversy, unexpected reactions and some deep conversations.

“Medical Plants of Plaszow” is an experiment that an artist Jason Francisco conducted on the site of KL Plaszow, a former concentration camp. It is now a public park and recreational area. He found out that all different medical plants and herbs grow there. In an attempt to answer the question “What forces of healing is the genocidal earth of Plaszow itself generating?” and with the help of ethnobotanist and local community center, Jason created the garden of Plaszow medical plants that was accompanied by a photographic and textual exhibition.

“FestivALT is a passion project. We are also running it as a collective. There is not one leader.” – Michael explained. This was a conscious decision, coming from the belief that each person can contribute a different set of skills. FestivALT is also a volunteer-run organisation. It makes the decision process more democratic and inclusive, and sometimes things take longer, but it works well.

“We at FestivALT are interested in Polish Jewish artists. There are a lot of Jewish artists around the world who have roots in Poland but they do not even identify themselves as Polish people. I have found that once they start to, they start to feel a connection and it is not just Holocaust, Holocaust and Holocaust. I see awakenings in other people and I saw it happening with me and with the members of my family. My goal is to bring more Jews to Poland. To me artists are my people. To me, they are our story-tellers. They are the ones who rebuild the narratives. The artists are the ones who can reshape the today’s Polish-Jewish narrative.”

To find more about FestivALT go to: