The message of Chanukah: We can Change the World!

The festival of Chanukah is unique in that it spreads across two Hebrew months. It started on the 25th of Kislev (23rd December this year) and lasts for eight days, until the 2nd of Tevet (30th December this year). As Chanukah is such a popular festival, we will take the opportunity in the Tevet newsletter to explore a different aspect of the festival. 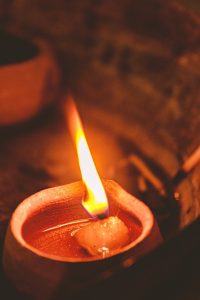 The historical story of Chanukah takes place with the Land of Israel under the rule of the empire of Alexander the Great. Antiochus IV actively forced Hellenisation on Jewish society, forbidding Jews to practice their religion and set up a statue of Zeus Olympus in the Temple in Jerusalem (if you check out last month’s newsletter here you can learn more about the background story of Chanukah). A small and heroic group of Jews called the Maccabees fought for their religious freedom, winning a stunning military victory against the most powerful army of the ancient world. After three years, they reconquered Jerusalem and rededicated the Temple. They only managed to find among the wreckage one jar of purified oil, enough to light the menorah for one night only. Miraculously it burned for eight nights, allowing enough time to process new oil.

In the special prayer said on Chanukah (Al Ha-Nisim – “About these miracles“), the military victory is described as a victory of the few over the many and the weak over the strong. It was a remarkable upset, against all the odds, and one of the most stunning military achievements of the ancient world. The Maccabees were outnumbered and ill equipped compared to the cutting edge military technology of the Seleucid army. But the one natural resource they did have, and they had it in spades, was Jewish spirit, and the soul of a people longing for freedom and prepared to fight for it.

Sometimes it is easy for those of us who work for the Jewish people to despair at the scale of the task that lies before us. But stories like this must teach us that a handful of dedicated people can change the world. Perhaps we can learn this message not just from the military aspect of the story of Chanukah, but from the religious and spiritual dimension also. Just as a single flame from a candle can banish the darkness in a cavernous room, an individual, and even more so a dedicated group of people, can change the world forever!

This is a well-known story with a connected message you may find useful for Chanukah:

There once was a wealthy businessman who had three sons. He wanted the cleverest of his sons to inherit all his wealth, and to discover which one that would be he set them a task to prove their intelligence. He showed them a barn on his estate, and challenged his sons to fill the barn to the fullest. Whoever best succeeded in this task would win the entire inheritance.

The eldest son worked day and night gathering rocks and pebbles of all shapes and sizes to fill the barn from the floor to the roof. His father was most impressed with his effort, but he found many spaces in between the rocks and stones. The second son used straw, and packed the barn from floor to roof with the straw that was compact and fit tightly. However, the father still found spaces and pockets of air within the straw.

All this time the youngest brother had not been busy at all, lounging around watching his brothers toil in their task. When his turn came, he took his father by the hand and led him into an empty barn. His father became upset, that he had not taken the challenge seriously, but at that moment the son took a small candle from his pocket and lit it. Instantly, the barn became filled, from the floor to the roof, in every nook and cranny, with light.

This article describes the inspiring story of Natan Sharansky’s experience of celebrating Chanukah in the Gulag.

Here are the Chanukah resources that were featured in the Kislev Newsletter last month:
Pardes – Elmad, Sefaria, The National Library of Israel, Reform Judaism.org, Chabad, The Jewish Federation of Greater Washington, The Lookstein Center for Jewish Education.
We hope you find them useful for Chanukah programming!

Also check out our previous Chanukah related Resource of the Month here.