On the seventeenth day of the Jewish month of Tevet we are all invited to a brit mila (circumcision). How do we know this so far in advance? Simply because the corresponding day in the general calendar is 1 January, which celebrates Jesus’ circumcision – do the calculation and you will see it works.

Most people are unaware of this anniversary. For much of Christian history, the Church downplayed the Jewishness of Jesus though the Eastern Orthodox, Anglican and Catholic denominations do mark Jesus’ brit. Paralleling this, many traditional Jews have ignored new year as irrelevant or antithetical to Jewish values due to its Christian origin and the excess that often characterizes this day.

What is written above is in stark contrast to the meaning of the day for most Europeans. For the majority of people – Jewish or gentile – new year is a secular day celebrating the end of the old year and expressing hopes for the new. Parties, drinking, dancing are the “mitzvot” (commandments) of the day. Especially in countries that were communist, many Christmas customs became thoroughly secularized and were transformed into new year celebrations. 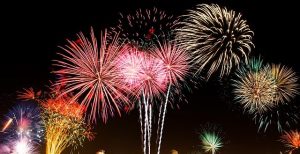 Some Jews continue to ignore 1 January. This ignoring is a way of defining one’s limits and drawing a line between oneself and the outside society. For many who do this, there are more than enough Jewish celebrations without looking for extra festivities. But this behavior is common only among small pockets of Jews. Most Jews accommodate the day by seeing Rosh Hashana as the Jewish new year and 1 January celebrations as an expression of being part of general society.

But there is a third option and that is to mark New Year in a Jewish way. This may be for pragmatic reasons (if people are celebrating anyway, let’s capitalize on it and make it Jewish) or for ideological reasons (there’s importance to bring Jewish values to bear on general society).

Here is an article that deals explicitly with Jewish ways to celebrate the new year. There is very little writing on this issue so this can be an opportunity for creativity. If you find other appropriate articles or come up with some great ideas or practices of your own, please share with us.

In recent years Russian Speaking Jews in Israel have started celebrating Novy God (Russian New Year). The day has become Israelified and even a bit Judaized. To learn more, read this article Israeli Novy God? What a Russian Holiday can Teach Israelis and those of us beyond Israel!

Regardless of whether 17 Tevet sees you celebrating the start of 2021 or is just another day in the Jewish calendar, let’s hope for twelve months of health, safety, and freedom for all the Jewish people and for all the world.

Resources to reflect with & reset for the new year

There are many resources available online, on our bookshelves, and most importantly in the people we work and engage with on a regular basis. As a starting point, and in a context relevant to Jewish community work in Europe, we share two podcasts with you on setting aims and objectives, and measuring success. The podcasts reflect the learning and experience of Colin Bulka, Yesod Program Director, recorded during his time as JDC Hungary Director.

Listen to Colin exploring the whys, whats and hows of setting aims and objectives and together with your team use our Sefaria source sheet to study Jewish texts about the importance of having shared aims.

In this part 2 podcast following that on aims & objectives, Colin emphasizes how important it is to think carefully about measuring the impact of your programs. As a team it helps you to refine and clarify exactly what you are hoping to achieve and why, to keep improving your work, and is a key part of requesting and reporting on funding received. Click here to listen to the podcast.